A field team from ACT traveled to the Curare – Los Ingleses Indigenous Reserve in the Colombian Amazon in July to assist local communities in the creation of a detailed management plan for their rainforest territories that integrates western and traditional perspectives to achieve sound conservation practices. Amazingly, this remote reserve has spearheaded national efforts to protect their neighbors: a group of indigenous people who have chosen to live in isolation, shunning contact with the outside world.

The protection of indigenous groups living in voluntary isolation – the so-called “isolated tribes” – is one of the most urgent human rights and environmental issues of the early 21st century. These communities have chosen to avoid contact and are some of the last populations on Earth that live independently, surviving on forest resources alone. Respecting their right to self-determination helps preserve a vital part of humankind’s cultural diversity and heritage. Furthermore, these groups reside in the most remote corners of the Amazon, making the protection of their territories essential for the preservation of intact forests that maintain enormous levels of biodiversity and mitigate climate change.

Unfortunately, threats are closing in on all sides, with illegal loggers, drug smugglers, itinerant gold miners and large infrastructure development projects encircling the last isolated indigenous communities. For these isolated groups, contact with the outside world represents a threat to their survival and the integrity of their culture and rainforests. Even minimal contact with the outside world can have deadly consequences, as their limited immunity to foreign diseases means that the common cold can decimate entire communities. This image from DigitalGlobe’s WorldView-3 satellite shows what a maloca looks like from space (the red rectangle at the center of the image).

In 2010, the passengers of a small propeller plane spotted two malocas (traditional communal houses) in a vast green sea of forests within the Rio Puré National Park in the Colombian Amazon; the discovery marked the thrilling culmination of decades of research led by local indigenous communities in partnership with the late Colombian historian Roberto Franco. Later in 2012, high-resolution satellite imagery provided by DigitalGlobe, a Maxar company, revealed the presence of no fewer than twelve malocas, indicating an expansive territory likely occupied by at least two distinct ethnic groups.

Now, the Curare – Los Ingleses community is spearheading local efforts to protect these groups, who they call their “brothers in a natural state.” To accomplish this, they are partnering closely with the Amazon Conservation Team and the Colombian National Parks Service to implement a monitoring and control strategy that integrates traditional spiritual worldviews into modern environmental protection strategies. To further protect their isolated neighbors, the community of Curare has also designated three management zones within their territories: areas for resource extraction, conservation areas (with very limited extraction), and “no-go” zones for the protection of isolated peoples.

With collaboratively designed management plans in hand, the ACT field team set off from Bogotá to Leticia, located at the juncture where Colombia, Brazil and Peru intersect in the northwest Amazon. From there, they climbed into a crowded cargo plane, an old DC 3 model, packed full of pungent-smelling fish. After a bumpy two-hour ride, the plane descended through a thick layer of clouds, drawing a wide circular arc over Mount Cyupati as the pilot glanced out of the side cockpit window, eyeballing the tight descent into the small dirt airstrip of La Pedrera, a small town near the border with Brazil. From there, the team ascended the Caquetá River, past the churning rapids of Curare, and arrived in the village of Borikada in the Curare – Los Ingleses Reserve. In the above image, Brian Hettler from ACT shows a group from the Curare – Los Ingleses Reserve how to interpret DigitalGlobe’s satellite imagery.

There, ACT hosted a workshop with the community to jointly develop a more detailed management plan of their reserve by identifying areas used for hunting, fishing, wild fruit collection, and other traditional land use patterns. Once again, DigitalGlobe imagery played a vital role: the detailed imagery enabled the community to identify their houses, gardens, and small creeks so that they could more accurately pinpoint what areas they use for self-subsistence. High-resolution satellite imagery has also been used to search for illegal mining barges, deforestation and other threats.

During the workshop, the community split up into teams composed of traditional leaders, men, women, adolescents, and children. As each group drew their own map on top of the satellite imagery, they revealed how the groups differently used the same territory. The youth expressed fascination with the mapping exercise and provided a unique perspective, such as identifying areas with wild fruit and turtle nesting spots. This workshop was one of the first times the reserve’s women and children had been involved in the community planning process, and their confidence and engagement grew throughout the events. 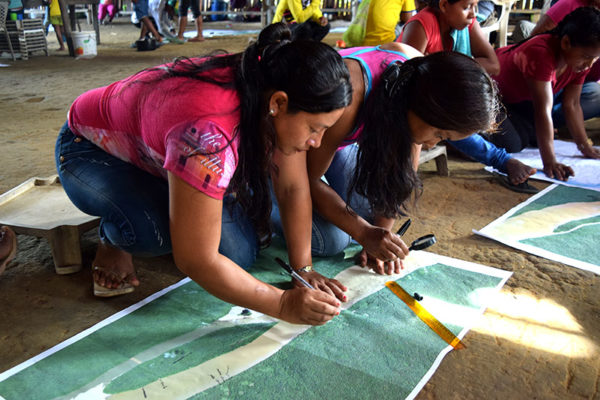 People of all ages were engaged in mapping their community for monitoring and conservation efforts.

At night, the community gathered in the maloca to chew mambe—powdered coca mixed with cecropia leaf ashes—to review the day’s proceedings. Each participant reflected on progress made, after which the chief nodded his head and exclaimed “Otro mambeadito!” (“A little more mambe!”) These traditional spaces of honest conversation are an integral part of the local culture, where people talk, listen and reflect on issues affecting the community. And for outsiders, participation in these settings is essential to partnering with these indigenous communities.

In addition to monitoring and control strategies, these indigenous communities have also led a 5 year effort to develop of a national public policy for the protection of isolated indigenous groups, which was just approved by the Colombian government. This is the first policy of its kind in the Amazon basin to undergo a process of previous consent with indigenous communities at all levels. Thus, it was developed as a collaboration between the Ministry of the Interior, the indigenous association OPIAC and the national and regional Amazon Indigenous Councils. The policy states that the decision of these groups to remain in isolation must be respected and their territories protected, while also establishing guidelines for the implementation of non-invasive research methodologies, like the use of satellite imagery, to confirm other isolated communities.

To watch the full animated short on the protection of isolated tribes of the Amazon, please click here.

The protection of indigenous groups living in voluntary isolation – the so-called “isolated tribes” – is one of the most urgent human rights and environmental issues of the early 21st century. #LetThemLive Click To Tweet